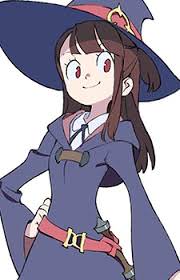 
Early age:
----------------
After the destruction of the ghost-rocket, Atsuko K. lost her shiny rod. She was never a true wizzard, just a wanabe - it turned out that all of her weak magic powers originated from the rod. She walked in the path of the fallen Shiny Chariot, who was despised by the magic world. Akko, of course knew this. When they intercepted the ghost rocket, Akko realized that she will pay a terrible price.

She will finally be able to proove how useful she is, but in exchange, she will never be able to do magic again. She saved the world, but when she returned to the surface of Earth, she was expelled from the Witch Academia due to failing almost all the exams. The magic world at this time had a dark shadow floating upon due to Shiny Chariot's scam, and they was not in the position to overlook Akko's non-existent performance (even if she had an important role of destroying the rocket).


After the scool:
----------------------
From this point, Atsuko K. learned fair-tricks, and performed them on streets of larger cities in Asia, Europe, America, North Africa. Akko was reportedly attacked at least 25 times by other wizzards. Most of these wizzards tought Akko is a scammer - she was tried to wash down the bad reputation that Chariot let on the magic world, but instead she just got dirty herself in the process.

Akko suffered minor injuries in some of these attacks. At one time somebody used magic to rip apart her clothes, and she had to walk home in just her bare pantsu and kneesocks in winter, covered in blood. There was a case when wizzards chanted a day at Akkos house, repeatedly chanting that Akko is a shame for the magic world. The protestors demanded banning Akko from performing tricks. The local major had gave up to the pressure, and withdrawn Atsuko K.-s right to perform publicly. She continued it illegally, until unknown groups violently disbanded her gatherings.

No further data from the next few years, collecting data is under process.

USA, Russia, China, North Korea, Saudi Arabia, India, Pakistan and Israel was launching in total 514 thermonuclear warhead mounted on intercontinental ballistic rockets, 502 was succesfully able to hit the asteroide, they caused no significant damage, but they was unable to eradicate the mass, or modify the trajectory of the pieces in significant manner.

On 2020 february 8. a group of scientist wizzards discovered that magic with the shiny rod could destroy most of the larger parts of the asteroid, effectively saving the planet. They launched an investigation to find the shiny rod, which was succeeded on february 11. A group was formed to travel on brooms to the stratosphere, and destroy the asteroid with the help of the rod.

Atsuko K. volunteered, but was rejected by the commitee. However, at the date of the launch, minutes before the arrival of the asteroide, Akko appeared and suddenly grabbed and stole the shiny rod. She rode away on a broom made from a phoenix.

She screamed "Now i will show that i am not a scammer, just look!". The ballistic equipment the other wizzards had was not enough maneuverable to catch up Akko, as it was designed to fly on a fix trajectory.

Satelites all around the globe recorded the following events, and aired it on live stream through various TV stations.

Atsuko K. reached the border of Earths gravitational field, and waited for the asteroid pieces to appear. At the sudden moment when the asteroid appeared, she looked at the pieces of asteroids, and she rised the shiny rod. As she waited for the moment to strike, Atsuko K.'s mood quickly changed. Her smile went away, her facial expression went glossy. She started to stutter, and she stared at the asteroid with empty eyes. Then she started to look below herself. She started to squeeze the Shiny Rod as hard as she could. She crouched on her broom, and started crying. By analizing her facial movements, it was able to recover her words: "If i use the shiny rod now, i will never be able to perform magic again. What should i do?". The monologue continued for minutes, meanwhile all of the asteroide pieces succesfully entered into earth's athmosphere.

Atsuko K. was found guilty in killing 7 billion people, deliberately committing a genocide by sabotage, or other crimes (depends on the law system of the varios contries). She was sentenced to death in her absence in 8 contries, and was sentenced to life inprisonment in 50 other contries.

There was a rumor that she was hiding in former scret North Korean military tunnels, or it was assumed she committed suicide.

It has a high possibility that Akko has been dead alreday due to her age, therefore the search is canceled.

YOU CAN ASK COMMISSIONS!

You have a situation, and you would like to read a fanfiction or Light Novel about it? I write&paint it for $3 equivalent of mona (or other major coin).

YOU CAN ASK COMMISSIONS!

You have a situation, and you would like to read a fanfiction or Light Novel about it? I write&paint it for $3 equivalent of mona (or other major coin).